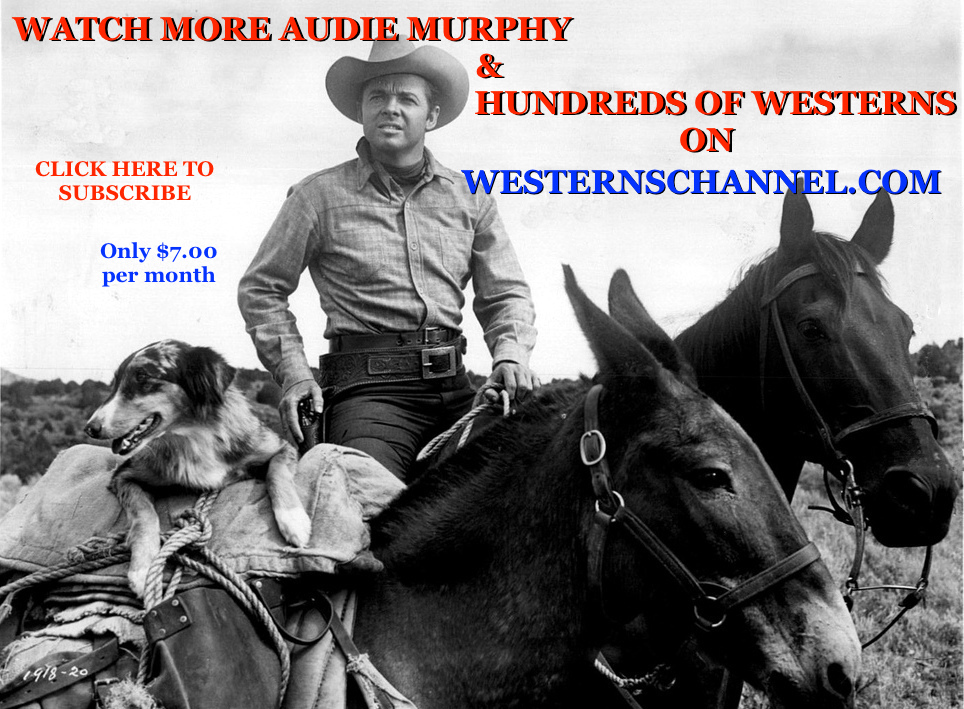 The Duel at Silver Creek

uploaded to dailymotion by Ursula Strauss in 2013

Railroad surveyer Murphy goes after rustlers who murdered his father and brother. Along the way, he first arrests then teams up with outlaw Duryea who helps Murphy only to see how long the tenderfoot lasts. Outwitting several attempts on his life engineered by the crooked lawyer who set up his family, Murphy and a wounded Duryea face the gang. Duryea, wanted to protect Murphy and redeem himself goes down shooting.

The Duel At Silver Creek – western – Audie Murphy, Faith Domergue, Stephen McNally. Is also a western that is available at times.
Lightning Marshal Tyrone and the Silver Kid form an uneasy alliance against a gang of claim jumpers.

Murphy deserts the Union Army to warn former Texas neighbors of impending Indian attacks triggered by Army massacre. He overcomes initial distrust and convinces the homesteaders all the women whose men are away fighting in the Confederate Army to take refuge in an abandoned mission. He trains them to fight and shoot in anticipation of the attack. The only other man at the mission runs away o save his scalp and ends up leading the Indians back to the mission. Surrounded and outnumbered the defenders prepare for the final assault.

Column South – western – Audie Murphy, Joan Evans, Robert Sterling is another Audie Murphy western we have from time to time.

Lt. Jed Sayre struggles to prevent pre-Civil War tensions and a racist commanding officer from triggering war between the U.S. Cavalry and Navajo Indians, he finds his efforts are being undermined by the machinations of Confederate sympathizers.

The Kid From Texas western from 1950 Audie Murphy, Gale Storm.
Young Billy the Kid becomes embroiled in Lincoln County New Mexico land wars. When the rancher, who gave him a home, is killed by a rival henchman, Billy sets out to revenge his murder and becomes a fugitive himself.

SHARE ONFOLLOW US ONAudie Murphy Western Movies to watch Free – page two.    Seven Ways From Sundown (1960) Full Movie | Audie Murphy Movies Hell Bent For Leather starring Audie Murphy and Felicia Farr In this western Audie is knocked down and his horse stolen by a man he helps walking through the desert. …

SHARE ONFOLLOW US ONAudie Murphy Western Movies to watch Free – page three.    free western movies on the internet . This is one of Audie Murphy’s finest cowboy western movies . Audie Murphy was not only a fine actor but was the most decorated American soldier from World War two . He is a …