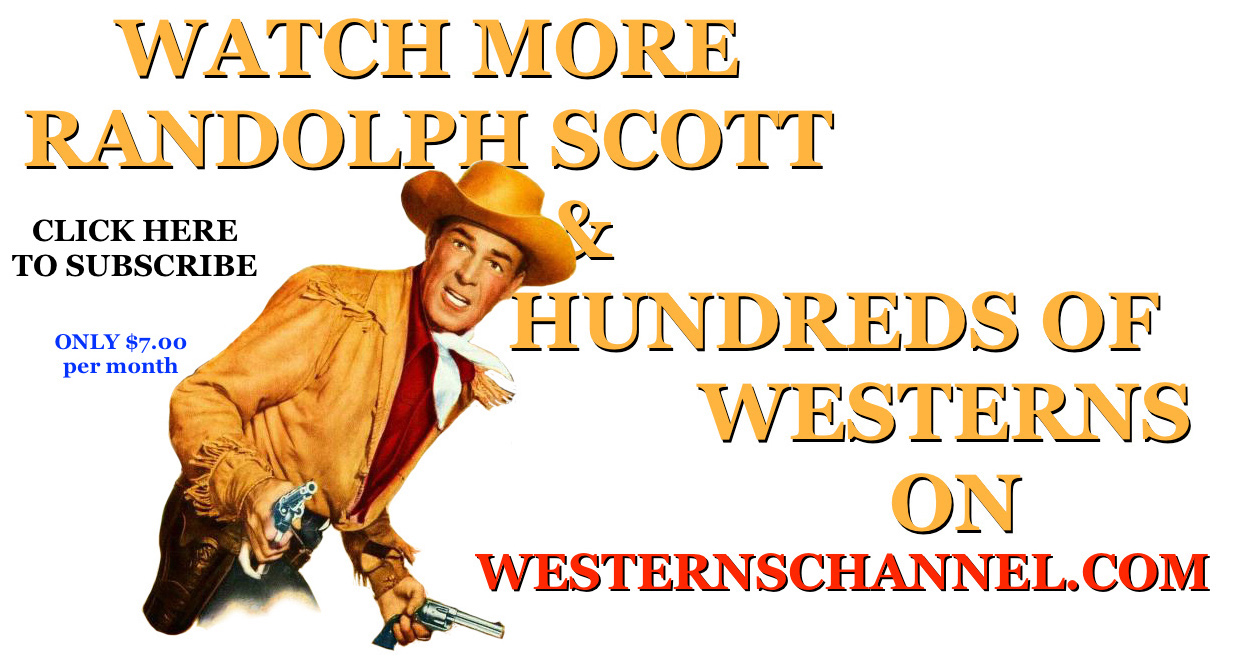 The Tall T – western movie starring Randolph Scott, Richard Boone, Maureen O’Sullivan, Arthur Hunnicutt, Skip Homeier, Henry Silva and John Hubbard.
A gang of outlaws plans to rob a stagecoach of its payroll but end up kidnapping a copper mine heiress instead!

another classic great full length complete western movie for free to watch on the internet. This movie is titled Rage at Dawn . This movie has a wonderful cast it stars Randolph Scott and also has Forest Tucker, Mala Powers, Denver Pyle, J. Carrol Naish, Edgar Buchanan, Ray Teal, Myron Healey, Howard Petrie, William Forrest, Trevor Bardette, Kenneth Tobey and has a great cast of others. Hosted by Bob Terry . Rage at Dawn was released in 1955. This wonderful full length western movie is from a Frank Gruber story . This movie western is about the Reno Brothers outlaws gang . The Reno Brothers carried out the first peace time train robberies in U.S. history.

John Stewart is attempting to establish law and order on his vast Arizona spread without resorting to violence. Less peacefully inclined is Stewart’s chief rival Wick Campbell (Richard Boone) who believes that might is right. To this end, Campbell recruits the services of hired gun Frank Scavo (Leo Gordon) and eight other pluguglies to drive all competition out of the territory. Jocelyn Brando costars as the woman in Stewart’s life, while Donna Martell plays Campbell’s much-abused mistress. Also registering well is Skip Homeier as Stewart’s resentful nephew who’d rather be anywhere else but Arizona.

Hosted by Bob Terry. Randolph Scott Is a Sheriff caught in the middle in a war between Cattlemen and Settlers. Also in this movie is Edgar Buchanan who later played Judge Roy Bean on the television western titled Judge Roy Bean and produced by Russell Hayden . Edgar Buchanan was a very busy character actor he seems to have been in half the westerns made . Including Shane, McClintock, Yuma, Texas, Destry Rides Again . with Audie Murphy, Ride the High Country and on and on . Randolph Scott made many types of movies but for some reason westerns seem to have been what he did best and later in his life when he was co producing his movies he settled in to making westerns and westerns only. Here is one of his early westerns and its a pretty good one ! Great entertainment ! This movie has fallen into public domain. A bit of TRUE TRIVIA about Randy Scott is that he was friends with the Reverend Billy Graham . AND it was Billy Graham who ministered and preached Randolph Scotts Funeral ! A very nice book about Randolph Scott is his son Chris H. Scott’s book titled Whatever Happened To Randolph Scott.

When Cole Armin is recruited by his corrupt uncle as heir apparent to his freight hauling empire he defects and partners with his honest rival.

SHARE ONFOLLOW US ONRandolph Scott Western Movies to Watch Free – page two.     Randolph Scott Abilene Town complete western movie. Hosted by Bob Terry. Randolph Scott Is a Sheriff caught in the middle in a war between Cattlemen and Settlers. Also in this movie is Edgar Buchanan who later played Judge Roy Bean on …

SHARE ONFOLLOW US ONRandolph Scott Western Movies to Watch Free – page four.     Randolph Scott When The Daltons Rode Randolph Scott and Kay Francis Young lawyer Tod Jackson arrives in pioneer Kansas to visit his prosperous rancher friends the Daltons, just as the latter are in danger of losing their land to a crooked …