Return Of The Frontiersman Gordon McRea

Jason Clay is a cowboy with several cases of Kentucky Rifles heading out to California when his wagon breaks down. Unfortunately, the axel is broken as well as the wheel, forcing Clay, his mentor Tobias, and others– Lonnie Settler, Luke, Preachur Bently, Amy Connors and her boyfriend Fostner and the Hays, the wife Cordy is expecting a child. The group encounter some Indians as they scout for a piece of sturdy wood to mend their axle.
Chill Wills … Tobias Taylor
Lance Fuller … Jason Clay
Cathy Downs … Amy Connors
Sterling Holloway … Lon Setter
Henry Hull … Preacher Bently
Jeanne Cagney … Cordy Hay.

djpseudonym Loved this film. Very funny in parts and great all round story with some class twists. Brilliant!

I enjoy your western movies.What happened to the westerns that had Errol Flynn and Jeff Chandler.Those was some good Westerns too.Westerns on the Web was a VERY GOOD idea. Thank You. Very entertaining light hearted western movie! Watch for Rory Calhoun also! Dawson wants to prevent a train from getting to Tomahawk, Colorado on time, so to keep it from competing with his stage coach line. Kit Dodge Jr. who must get the train to its goal forces Johnny Behind-the-Deuces aboard as the needed passenger.
Dan Dailey as Johnny Behind-the-Deuces
Anne Baxter as Kit Dodge Jr.
Rory Calhoun as Dakota
Walter Brennan as Terence Sweeny
Marilyn Monroe as Clara
Charles Kemper as Chuckity
Connie Gilchrist as Madame Adelaide
Arthur Hunnicutt as Sad Eyes
Will Wright as Dodge
Chief Yowlachie as Pawnee
Victor Sen Yung as Long Time.

Also known as Lassie’s Adventures in the Goldrush, is a 1951 action film produced by Metro-Goldwyn-Mayer and directed by Harold F. Kress. Adapted by True Boardman from Alexander Hull’s novel Shep of the Painted Hills. After years of prospecting, Jonathan finally strikes gold. He returns to town only to discover that his partner has since died and left Tommy fatherless.
Pal (credited as Lassie) as Shep
Paul Kelly as Jonathan Harvey
Bruce Cowling as Lin Taylor
Gary Gray as Tommy Blake
Ann Doran as Martha Blake
Art Smith as Pilot Pete
Andrea Virginia Lester as Mita
Chief Yowlachie as Bald Eagle
Brown Jug Reynolds as Red Wing.

We found this one on youtube where it has been for over a year! ENJOY! A mysterious stranger rides into a homesteading family’s life when they are attacked by a ruthless gang.

SHARE ONFOLLOW US ONAssorted Western Movies to Watch Free page 2    Hellfire starring Bill Elliott, Marie Windsor and Forrest Tucker. The Cisco Kid and the Lady CESAR ROMERO An orphan whose father has been killed by bandits inherits a mine. The dying miner ripped his map into three pieces. Cisco saves the mine and … 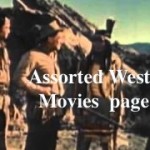