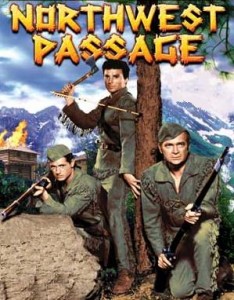 A 26-episode half-hour adventure television series about Major Robert Rogers during the time of the French and Indian War (1756–1763). Major Robert Rogers organized “Rogers Rangers” to search for the alleged waterway across the United States during the French and Indian War. The show derived its title and the main characters Rogers, Towne, and Marriner from the 1937 novel of the same name by Kenneth Roberts, and from the 1940 MGM feature film based on the novel. The scope of the novel was much broader than that of the series and the second half of the book included an historically based attempt by Rogers to find a water route through North America as a “passage” to the Pacific Ocean. This attempt, lending its name to the novel and used by Roberts as a metaphor for the questing human spirit, is referenced in the first episode.
One of the earlier series telecast in color, Northwest Passage aired new episodes on NBC from September 14, 1958, to March 13, 1959.