Cisco Kid TODAYS FEATURED EPISODE The Big Switch. The Sheriff in Bonanza orders his assistant to bring the murderer Jim Hardy to the state prison, where Hardy is going to be hanged. On the way the assistant is killed by a shot from a man, who releases Hardy and brings him to his boss, Jim Holbrook. Holbrook plans to kill his employer, the ranch owner Henry P. Murdock, and replace him with Hardy, who resembles Murdock.
CLICK ON THE PHOTO TO BE TAKEN TO THIS EPISODES PAGE! 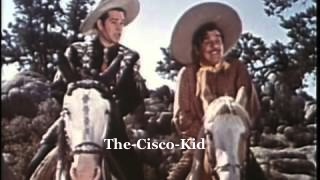